Monica Maggioni, born in Milan on 20 May 1964, is an Italian journalist. Since January 2013 she has been the Director of Rainews24, the RAI all-news channel. She joined RAI by winning a competition for the first Master of the Perugia Radio & TV Journalism School in 1992. From 1994 to 1996 she worked for Euronews (in Lyon) in the multilingual newsroom of the leading all-news Channel in Europe. She returned to RAI in 1996 in the TV7 newsroom, TG1 current affairs weekly. She worked on local news and later on foreign news. She has been a newsreader for Tg1 and editor of other programmes but she always wanted to be a war correspondent. From 2000 to 2002 she followed the most violent phases of the second Palestinian intifada and the Israel-Palestine conflict. After 9/11 she covered Middle Eastern reactions to the WTC events and travelled in Palestine and Lebanon. Later she was in the USA from October to December for a number of investigations on American internal subversion. In 2003 she was the only Italian journalist embedded in Iraq with US troops during the Gulf War. For three months she lived with US troops during the ground operations from Kuwait to the Iraqi capital. In May 2003 she arrived in Baghdad and started to regularly report Iraqi news up to January 2005. She went back to Iraq in 2007. Over the years she has followed wars and other crises all over the world, from Burma to Africa, Afghanistan where she went back in July 2009 with the marines. She travelled in Northern Uganda to cover the story of child-soldiers, victims of Joseph Kony. She also covered Iranian and Middle Eastern news; she met heads of state, bloggers, pacifists and terrorists. In September 2013 she interviewed Syrian President Assad after the UN resolution on chemical weapons. She moved to the US in 2008 to cover the election campaign that led to Barack Obama’s election. In the meantime she wrote for many Italian and international publications, amongst which Foreign Policy, and published foreign affairs articles. In 2009 she became editor-in-chief of the TG1 Special Newsroom: in charge of planning and implementation of the TG1 historical insights and she directed ‘Speciale TG1’, broadcast on Sunday evenings. In 2010 and 2011 she directed two documentaries shown at the Venice Film Festival: Ward 54, awarded with the Prix Mitrani in Biarritz, and Out of Tehran. In 2013 she became the Director of the RAI all-news channel that includes Rainews24, Televideo and Rainews.it. She has received many awards amongst which the Agnes Prize and the Luigi Barzini Prize for special correspondent. She published two books with Longanesi: ‘Dentro la guerra’ (2005) and ‘La fine della verità’ (2006). 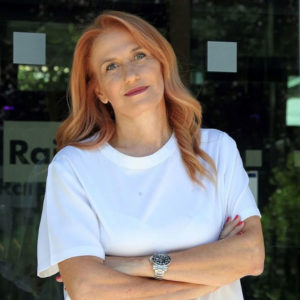